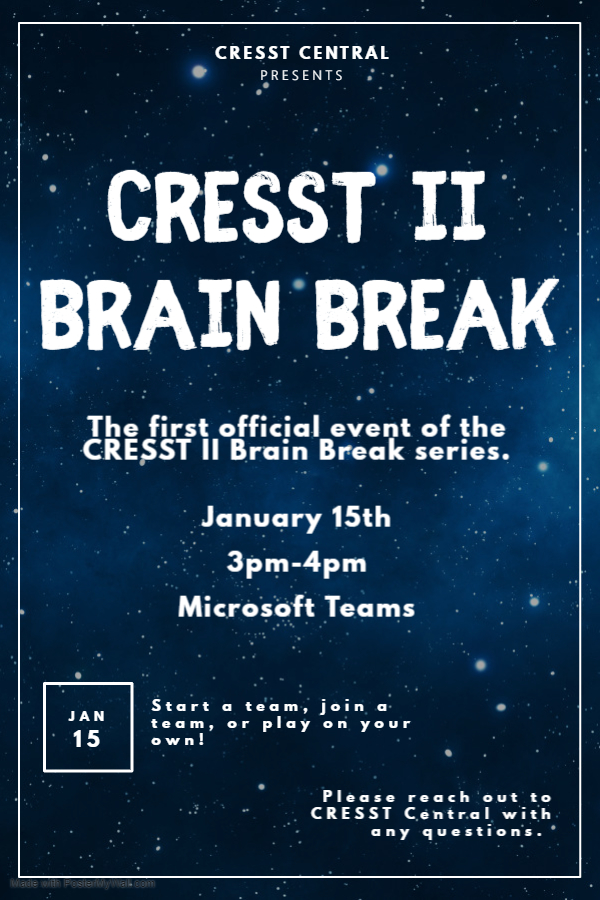 We at CRESST Central are extremely excited to announce our “CRESST II Brain Break” series. The series will be held on Microsoft Teams and will serve as a fun, social event for all to attend! Our different CRESST partners will compete in teams in a variety of games including Family Feud, Jeopardy and more. The games will be played in a bracket style with the final winner receiving bragging rights throughout CRESST!

Following January 2021, the subsequent events will take place on the second Friday of every month from 3pm-4pm. If at any time you feel you may need a “Brain Break” in between our monthly events, CRESST Central would be more than happy to set up ad hoc sessions.

We are looking to create Brain Break teams to participate in our future events! Teams can be as small as one and as large as (preferably) six. If you are interested in creating a team, joining a team, or competing individually please fill out this Google Form.

The official Brain Break events began in January 2021. A kick off to our new series was hosted on Monday, December 14th, 2020.

The Annual CRESST II Retreat was held on Friday, December 4th from 11:00 am - 4:00 pm. Due to the COVID-19 pandemic the CRESST II Retreat was held virtually, via the WebEx platform. The event began at 11:00 am with a welcome from CRESST II Director, Lee Mundy, followed by a keynote talk titled “Venus: the ExoPlanet Next Door and our Gateway to the Solar System” by our keynote speaker, Dr. James Garvin (NASA/GSFC). The rest of the day was filled with many CRESST II scientists giving talks and/or poster presentations. Topics ranged from augmented reality application, the Roman Space Telescope Coronagraph Instrument and much more! This year there was a total of six talks and three poster presentations. These presentations and talks gave insight into the incredible work happening by our CRESST II scientists and facilitated potential opportunities for collaboration between scientists. Following the main event, scientists attended breakout sessions for their respective home institutions. Thank you to all who participated, and we look forward to the next Retreat in 2021. 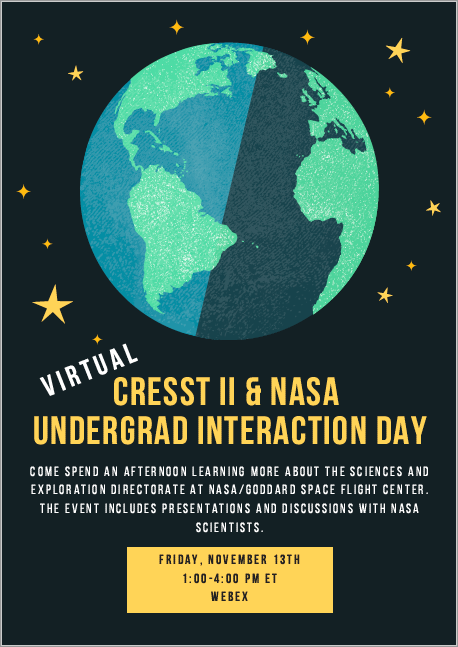 CRESST II will be hosting a virtual Undergrad Interaction Day on Friday, November 13th along with NASA scientists within the Sciences and Exploration Directorate at Goddard Space Flight Center. Students from eighteen CRESST II-affiliated universities will be invited to attend the event which will include overview presentations from NASA leadership about the work happening in the Directorate as well as project-specific presentations from 16 scientists in the NASA/GSFC Astrophysics Science and Solar System Exploration Divisions. This event will allow students to learn more about the research happening at NASA and talk directly to NASA scientists about their work, career path, and education. We look forward to having a great event.

The 2019 CRESST II Retreat was held on Friday, November 22 at the University of Maryland, Baltimore County (UMBC). CRESST II scientists gathered for an all-day event that began with a keynote presentation from the Deputy Senior Project Scientist for the James Webb Space Telescope, Jonathan Gardner. The day was filled with other talks from CRESST II scientists on topics ranging from the stellar flare views from NICER, results from CALET currently on the International Space Station, and high energy emissions from gamma-ray bursts. During breaks in the day, twenty CRESST II scientists presented two-minute poster summaries to their peers. These short presentations helped give a broader view of the work happening within the CRESST II Program at NASA/GSFC and helped spark possible collaborations between scientists. Thank you to all who participated, and we look forward to the next Retreat in 2020. 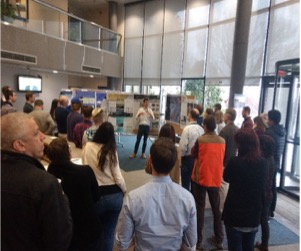 Marc Neveu presenting his poster on the geophysical and geochemical controls on abiotic carbon cycling on Earth-like planets. 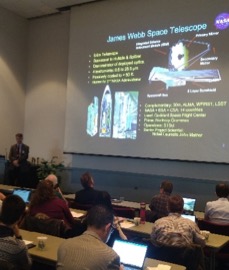 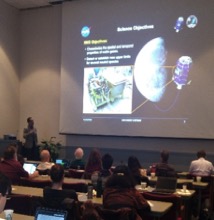 Mehdi Benna describing the discovery of water releases at the moon by meteoroid impacts. 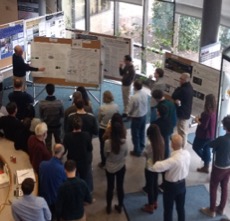 Chris Shrader pointing to his poster which details the low-luminosity core dominated radio galaxies and the extragalactic gamma-ray background. 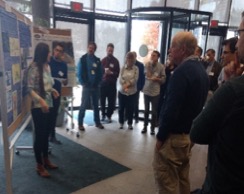 The annual CRESST II Retreat was held on Friday, November 16, 2018. Over 50 CRESST II scientists met at the University of Maryland - Baltimore County to exchange information on the variety of CRESST-affiliated projects taking places at Goddard. CRESST scientists gave eleven presentation and displayed sixteen posters on topics including the geophysical consequences for scattered terrestrial exoplanets, exploration of lava tubes in California, and insights into the modeling of the Apollo 17 lunar landing site. The retreat allowed each scientist to reconnect with past colleagues or meet new ones, and to leave with a greater understanding of the breadth of projects occurring within the CRESST Program. Thank you to all who participated, and we look forward to seeing everyone at the 2019 CRESST Retreat. 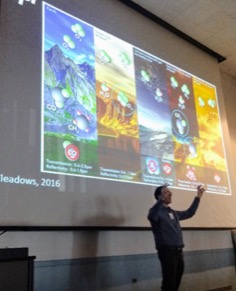 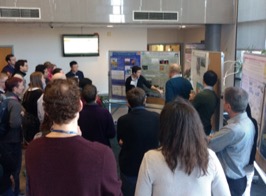 Nicole Whelley displaying her poster on the work of the Goddard Instrument Field Team (GIFT). 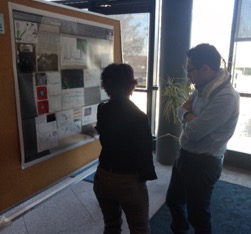 Dina Bower explaining her work on the versatility of Raman spectroscopy for planetary science. 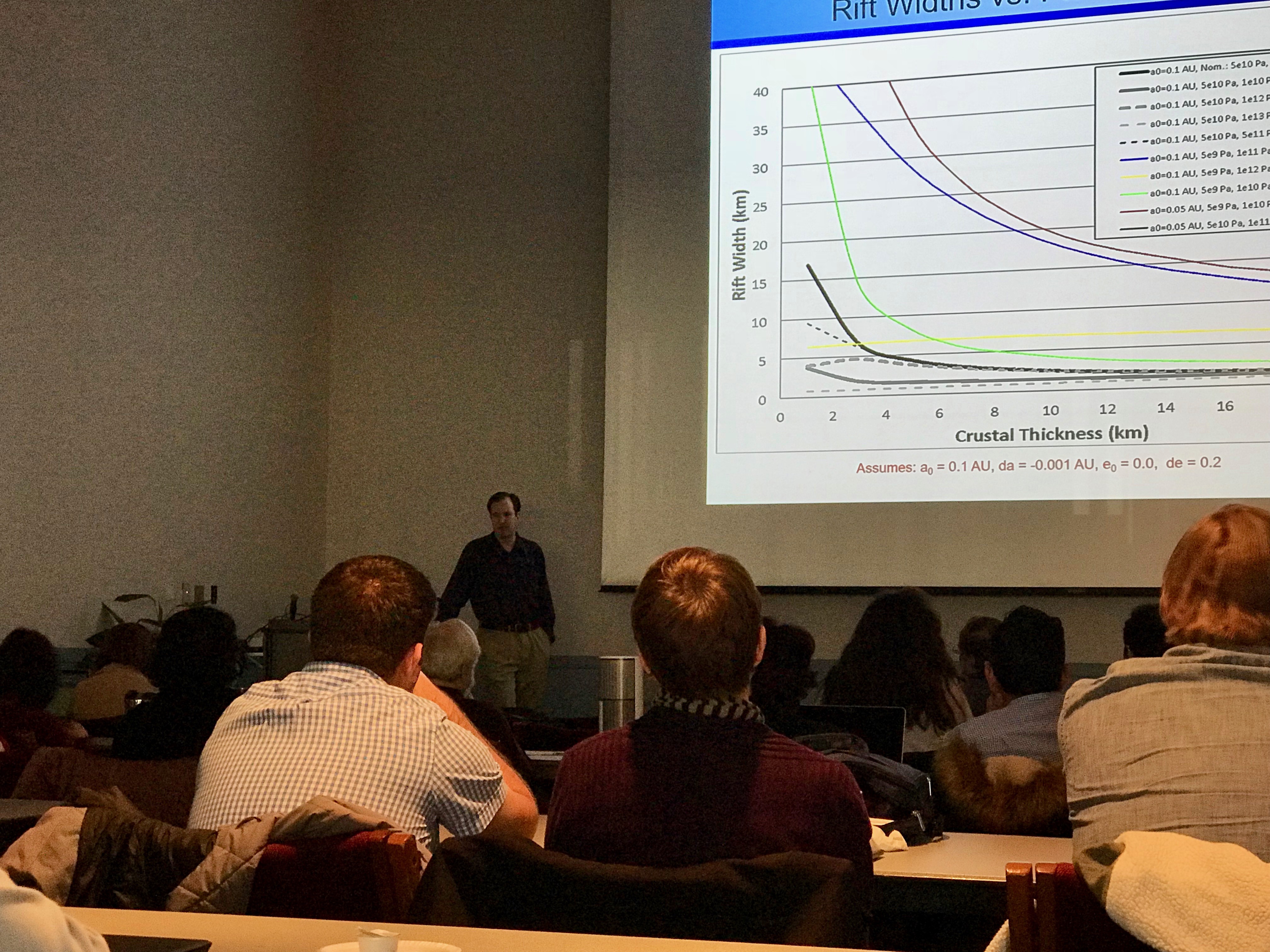 Wade Henning presenting is work on the geophysical consequences for scattered terrestrial exoplanets.

There are two new position openings. Details are on the CRESST II website, and links are provided in the summaries below. As new openings arise, we will continue to post them on the Opportunities portion of the website, and also point to them in subsequent News posts.